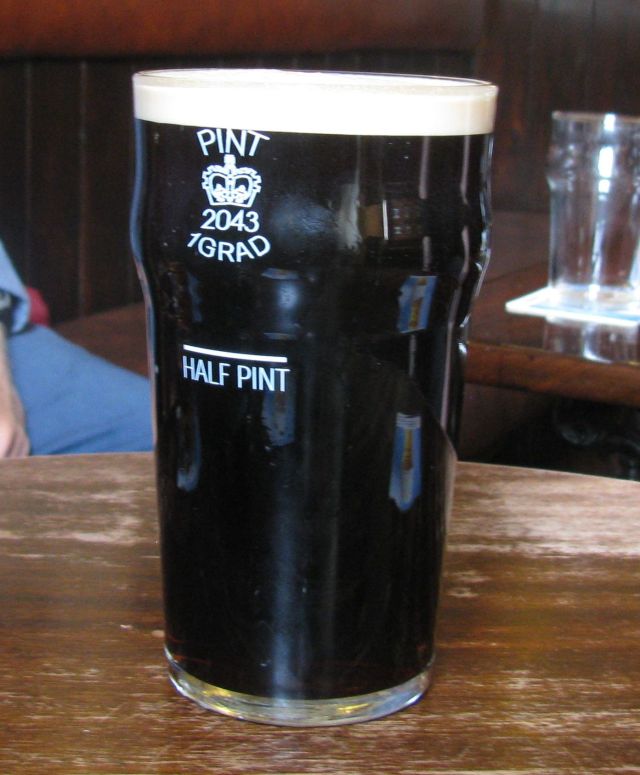 The typical American stereotype of British beer is that it is warm, flat and cloudy. This is even true if you are used to drinking mass produced American beers -- which are served as close to freezing as possible in order to numb your taste buds so you don't actually taste what you are drinking (I am not kidding here). A side effect of that super cold beer is that it retains more CO2 and is therefore "fizzier." Plus it is very tightly filtered which produces a crystal clear beer but also removes proteins that provide body and a nice foamy head. Even most American Craft Beer is served too cold, both because customers expect "cold beer" and the entire infrastructure for dispensing beer in the US is designed to serve cold beer. Serving a "top fermented" beer (that is, an "ale") at a warmer temperature not only allows you fully appreciate the taste, it allows you to fully appreciate the aroma. Yes, aroma. A Good Beer should also smell good.

The traditional beers of England are loosely known as "Real Ale." This is not a style as such but more a process of distributing and dispensing the beer.

With Real Ale, the brewery packages the beer in firkins (casks, these days made of stainless steel) before it is finished fermenting. It is transported to the pub were it is placed in the cellar and allowed to complete the fermentation. In the days before refrigeration this was a method insuring the beer was fresh when served (as the actively fermenting yeast would prevent oxidation and help protect the beer from spoiling bacteria). The cellarmaster at the pub would allow the beer to settle and complete the fermentation and when judged ready would be served to the customers. This process is also known as "cask conditioning."

One aspect of Real Ale as defined by the Campaign for Real Ale (CAMRA, www.camra.org.uk) is that it is dispensed without the aid of CO2 or other added gases. So it pumped from the cellar into the glass, usually by a hand pump with a long handle (also called a "beer engine") or by a motorized pump activated by a tap handle (see the Euston Tap and the Holborn Whippet for examples). Since artificial gases are not allowed, air is allowed into the cask. This means the flavor of the beer may will change over the time it is served. If the beer sells slowly, the flavor may change for the worse and become oxidized or even sour. This brings up another pub tradition that the better pubs follow: If after having a sip or two the beer is just undrinkable, you can usually return it to the bartender and he will pour you a different beer. This only works if you've taken a sip or two -- try to return a beer when you've drunk half of it and the reception will not be so friendly.

One reason Real Ale has not caught on in the US is that this limited shelf life of the beer means that if it is not turned overly fairly quickly, the pub will lose money thru spoiled beer. The response of many (not all) US (and some British) pubs is a sort of check valve called a "cask breather." It will allow just enough CO2 into the cask to replace the dispensed beer. This means the beer is not exposed to the air and will last longer, but it also will not undergo the changes that considered part of the Real Ale process. 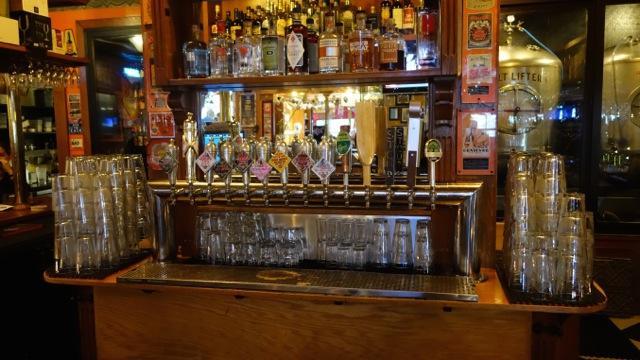 Up until a few years ago most of the "Craft Beer" produced in Britain was Real Ale. Beers dispensed with CO2 were either mass produced lagers or the occasional quality import from the continent (mainly from Germany or the Czech Republic). But with the example of good kegged beers from both the US and continental Europe many of the newer generation of British brewers are producing very good kegged beers -- both ales and lagers. This is causing some controversy with the "traditionalists" but I don't care -- Good Beer is Good Beer no matter who brews it and how they brew and dispense it.

When the pub lists here mention "taps" we are talk about kegged beer and usually it means Craft Beer. If the pub's taps only have massed produced industrial "stuff" we won't mention it. We're not interested in it and I hope you aren't either.

Sometimes it helps to know what the local customs are so you aren't so obviously a tourist, so here are a few tips. If you are in a pub there generally is no table service. You order at the bar and pay when you receive your beer. Historically, you did not tip the bartender, though the American influence has led to "tip jars" at some establishments. The traditional way to express your thanks for good service, good advice (in selecting beers at least) and such is to offer to buy the bartender a pint.

The traditional measure is a pint (an Imperial Pint, roughly 19 US ounces) but you can also order a half pint (for example, "A half of London Pride, please"). With the advent of stronger beers some pubs now will also serve 1/3 of a pint.

If the pub servers food you order in the same way: at the bar and paying immediately. Sometimes your table will have a number on it and other times they'll just ask you where you are sitting.

Since you are paying as you go, when it is time to leave you can just get up and go. However, it is considered polite to return your empty glasses to the bar.